Forward to the Past

Given the myriad of issues that I am having with some games in the Windows 7 environment (as well as AMD video card specific game issues), this weekend I began the process of rebuilding my Windows XP computer. I had tried a dual boot option with my Gateway however it didn’t work, and even if it did in hindsight it would not have resolved the scaling issue with Command Operations (and other Airborne Assault games) as I would still have been playing off of the same GPU and drivers.

My old XP rig was sitting in a closet without a drive but with an NVidia graphics card (a BFG Tech GeForce GTS 250) that played several games well. I know support for XP has ceased and that I am running a security risk operating the software; however I believe that I can pull this off without too much of a hassle.

I built the computer below in April 2007 and had retired it since moving to Windows 7 on a new PC: the images below and commentary relate to the resurrection of the XP machine:

The old beast risen from the dead (or the dust bunnies).

The time in the closet has taken its toll on the hardware with a significant dust buildup that required a liberal application of compressed air. Note the plastic sandwich bad sitting on top of the PSU: this is where I kept all the loose hardware (mounting screws, etc.) for the past few years after having removed the hard drive.

That hard drive had been sitting in an open bay slot as extra storage for Steam games when I thought I was running out of room on my primary hard drive (which I really wasn't). Attempts to use this drive as a dual boot operating system failed, so I used it only for games.

This is the same drive going into the carriage for the case just before returning to the mother ship. The Antec Nine Hundred mid tower is perhaps one of the greatest gaming rig case builds to ever hit the market and it is nice to put it back into some use.

And of course, the star of the show, Windows XP Home Edition - the best PC video game OS since Windows 98.

Speed bump: when in BIOS I had no keyboard or mouse control, so a thread I read online suggested that old machines can have the CMOS battery start acting up (or outright die), so I unseated the battery and reset it. In this image it is located directly below the video card, requiring that to be removed and replaced.

That however was not the culprit: it was that the USB support for both keyboard and mouse were defaulted to "Disabled" from within the CMOS setup utility. I switched both settings to "Enabled" and everything worked from that point forward.

When it comes to computer equipment I am a pack rat of sorts, saving mostly everything. Here I had the motherboard driver disk with four pages of step by step notes on what to install. After putting everything on I had internet access (from go), sound, and with the default GPU drivers was able to increase the resolution to a crisp native widescreen 1920X1080 (I plan on updating the drivers though later on).

The expected downer - web browsing functionality. This is how my blog displays on IE8, which cannot be upgraded in Windows XP. Other browser solutions (such as Chrome) are ending support for XP in 2015. So for capturing driver updates and whatnot, I pull that data from my W7 machine and migrate it to XP with a flash drive. Steam however seems to work fine within the XP environment which is just fine by me.

As a pure video gaming platform I should not have (in hindsight) retired this machine as the Compatibility Wizard in Windows is not always an optimal solution (and in several instances not a fix at all).

While surfing the web is practically nonexistent in XP given the dated capabilities of IE8 and many other browsers ending XP support this year, it does the job I need it to do – play XP designed video games better. 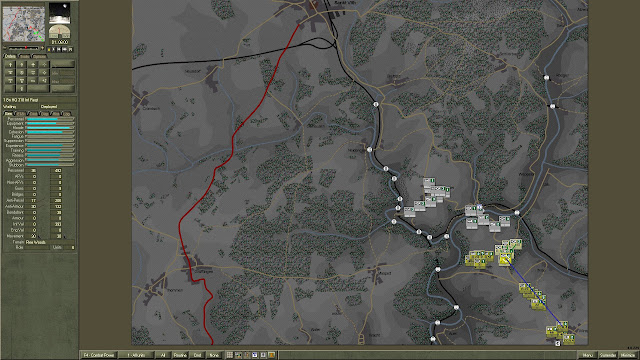 In the end, the entire effort was basically driven by this - Command Operations without the scaling issues.
Posted by RangerX3X at Friday, July 03, 2015

Email ThisBlogThis!Share to TwitterShare to FacebookShare to Pinterest
Labels: After Action Report, Battles from the Bulge, Commentary, Conquest of the Aegean, Highway to the Reich, Matrix Games, Old School, Panther Games, Windows XP